CERT welcomes Mark Rendell as our new Victoria State Training Manager. Mark brings with him a wealth of experience and skills in leadership and training.

With a 24 year background in rail, he began his career in 1996 with V/Line progressing through roles to become a signaller and shunter before completing a traineeship to become a locomotive driver and travelling across Victoria. It was during this time he was appointed as an On Job Trainer and passed his knowledge onto Trainee Drivers.

In 2008 he accepted a role with Rio Tinto in North West Australia operating some of the largest heavy haul trains in the world. His role evolved over the next few years before being appointed Training Manager of the Rail Division in 2011 working closely with the leadership groups within the Rail Operations, Mines and Project teams. In 2014 he moved back into mainline rail operations, where he worked in numerous leadership and project roles, finishing his career as mainline operations supervisor in September 2019.

Since joining CERT only last month, he has already engaged the Victorian team and will lead them to grow the business in a sustainable and compliant manner. 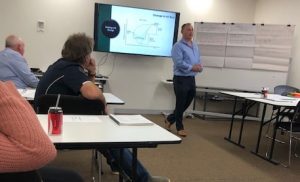 How is CERT keeping you safe during COVID-19?